I'm a digital archivist at the National Digital Information Infrastructure and Preservation Program (NDIIPP) in the Office of Strategic Initiatives at the Library of Congress and a doctoral student at GMU. I'm interested in online communities, digital history, and video games. I blog for Play the Past. Views expressed are not those of any current or former employer.

With 23 posts and 76 comments on the working group’s blog I think we have a lot to talk about in our session this Sunday. I’m not entirely sure about the best way to organize our session. We have a range of great posts on general visualization and interface questions and a series of posts that report out on detailed case studies. We have posts that focus on ways end users can visualize and create interfaces and posts that focus on the kinds of interfaces that we want our organizations to be able to provide to different audiences. We’ve discussed maps, timelines, graphs and charts and a range of different kinds of digital objects, including photographs, oral histories, and material culture. My hope for our working group’s face-to-face meeting is that we can have a chance to try and think across this work and use this as an opportunity to consider where we go from here.

I would suggest that we take the following approach to our session time.

So that is my suggestion for how to organize our face-to-face workshop time. If anyone has a different idea for the best way to use this time you should feel free to post suggestions in the comments.

It strikes me that there are two, somewhat overlapping, reasons that we do visualization. They are a method of communication and a method of discovery.

To make this a bit more concrete, the image below, from  information is beautiful, illustrates (and illustrates is a key term) the effectiveness of different approaches to fundraising for Wikipedia doesn’t really tell us something new. All of the data is up online and if we read through the data the relationship is evident. The graphic below just communicates that relationship more forcefully. 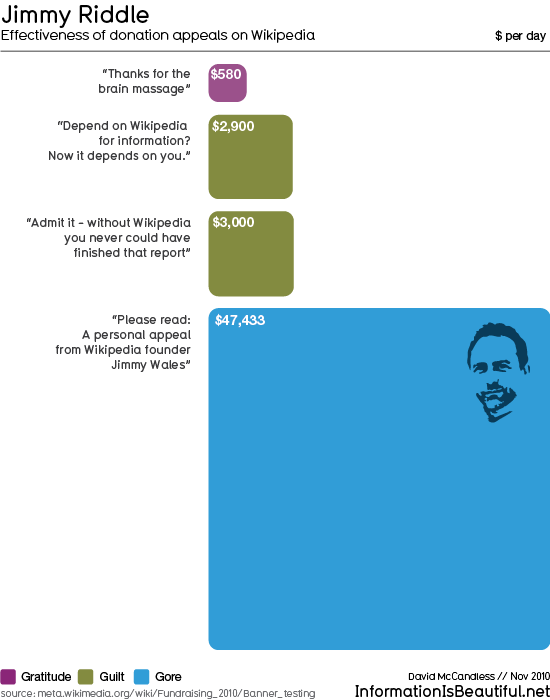 Visualizations are also tools for discovery. In this sense, visualization is a method for finding out new things. Even in the case of something really simple, like Wordle, we create something visual that we can then examine and explore for a potential new ways of seeing or understanding something. For example, in the Wordle below I feed the entirety of René Descartes Discourse on the Method of Rightly Conducting One’s Reason and of Seeking Truth in the Sciences from Project Gutenberg into Wordle and was then presented with the following representation of the book in a word cloud.

I did not know what I would get when I hit the button. The result is not particularly good in terms of communication, largely because I didn’t intend it to communicate anything. I just wanted to see what would happen. Now in this case, I find it interesting that things like “heart” and “blood” are as big as they are. If I were interested in taking this further I might go back to the text and try and suss out why this is the case. Now, if you don’t want to use the kids-table version of this sort of thing you can pick up something much more sophisticated and do things like Now Analyze That.

This line of thinking, of visualization as a method of discovery, is largely in line with Jessop’s ideas about Visualization as Scholarly Activity, and Drucker’s notion of Graphesis , wherein visualization is understood as “generative and iterative, capable of producing new knowledge through aesthetic provocation.” I think this is also very much what Moretti is talking about in Graphs, Maps, and Trees.

Is Public History Visualization Somewhere In Between?

For me this becomes a central question. What is the goal of visualization for an online exhibit, or a cultural heritage collection? Do we want to communicate something we already know as clearly as possible? Or, are we trying for the generative and iterative new knowledge producing capabilities of aesthetic provocation? In some cases, I think there is also the possibility of attempting to put something in the hands of the public that lets them engage in their own exploration and discovery in the context of a collection.

For example, contrast Digital Harlem and PhillaPlace. Both offer map based interfaces to cultural heritage data. Both let us explore in our own ways. With that said, I think Digital Harlem falls much more on the side of providing a messy-data-sense-making-discovery-place while PhillaPlace offers a structured visual communication space.

In the image above you can see the dense interface to Digital Harlem which invites us to poke around in the data they have gathered together and explore how the picture changes as we poke.

In contrast, the point of entry to PhillaPlace is a map that moves on it’s own. We see the cultural heritage points flip through. While PhillaPlace does offer a rich map interface, it is less about surfacing any patterns in the underlying data and more about giving you a way to browse via location.

What Approach to Visualization are You Most Interested in and Why?

I would be curious to hear from the group, and anyone else listening in. What exactly is it that you want to get out of visualizations? Are you trying to communicate something as clearly as possible, or are you trying to generate something messy that we can use instrumentally to develop new knowledge?

Creating and manipulating an interface to a digital collection is fundamentally an interpretive act. With Viewshare, a project I work on in my day job, the idea is that anyone who can create a spreadsheet also can create and share a dynamic online presentation of maps, timelines, charts and tag clouds that allows viewers to easily explore the rich information embedded in a collection. I thought I would use my first post as an opportunity to introduce everyone to this project. It is what I spend my days working on and it is my hope that participating in this group can help me further refine my thinking about what kinds of other features and refinements we should be thinking about bringing into the software.

If you want to try out the software you can visit the request an account page and the accounts folks will get you set up in short order.

I have included a set of slides I used to introduce the software to folks at the recent CurateGear conference. I have also included an embedded video of a recent workshop I ran on the software. I figured I would also include a set of background links on the project with some more targeted information.

Some Brief Background Reading on Viewshare

This video is of the Viewshare workshop from January 2012. The first ten minutes are an overview of some examples. The next twenty minutes is a start to finish walkthrough of using the software the remainder is Q & A. I don’t imagine that most of you will want to watch the whole thing, but if your even vaguely interested you can skip around in there a little and get a good handle of exactly what the tool can do.

Welcome to participants. For the time being I have this set up for all of you to register. Follow the steps below to get started.

How to register for the blog

Watch this screencast to see how this works in action. There is more information in the video.

Post comments here if you have trouble with this, or send emails to trevor dot johnowens at gmail dot com.

Welcome to Visualizing the Past, a blog for the NCPH working group exploring interfaces to cultural history. This blog is the point of contact for members of the working group to share ideas and work in the form of blog posts.

Here is a little background on the call for participants asked for a while back.

Digital cultural heritage collections include temporal, locative, and categorical information which is increasingly being tapped to build dynamic interfaces to these materials. These kinds of dynamic interfaces are increasingly what end users expect of their interactions with online content. There are now several software platforms, including SIMILE’s Exhibit, the Center for History and New Media’s Omeka, OCLC’s Content DM, as well as a range of commercial museum, library, and archive systems.

These kinds of tools are generating an unprecedented opportunity for historians, librarians, archivists, curators and the general public to create interactive and dynamic web experiences with digital cultural heritage collections.

Participants in this working group will discuss current projects in this space and also work to imagine the future of these kinds of interfaces. This will likely include: